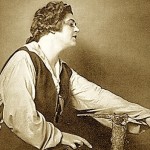 This Lotte Lehmann Chronology is divided into four parts. A condensed one-page version can be found at the bottom of this page.

1924 Covent Garden debut as the Marschallin in Der Rosenkavalier

1937 Leaves Vienna for the US; tours Australia

1947 Helps found the Music Academy of the West, Santa Barbara, where she lives and teaches both privately and at the MAW

1952 Master Classes (Pasadena, MAW and later throughout the world)

1953 “Evening with Lotte Lehmann” a series of staged performances, in which her students sang, and Lehmann spoke

1961 NET records her opera and Lieder master classes at MAW