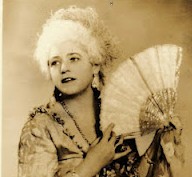 1. Sang world premier as the Composer in Ariadne auf Naxos by Strauss (1916).

5. Sang the world premier as Helene in Die Kohlhaymerin by Bittner (1921).

6. Sang the Vienna premier as Blanchefleur in Der Kuhreigen by Kienzl (1921).

8. Sang world premier as Christine in Intermezzo by Strauss (1924).

9. First woman to sing Sophie, Octavian and the Marschallin in Der Rosenkavalier (by 1924).

12. First singer to receive the rank of Kammersängerin since the collapse of the monarchy (Vienna 1926).

13. Sang the Vienna premier as Madeleine in Giordano’s André Chénier (1926).

16. First German to receive the French Légion d’honneur after World War I (1931).

18. Sang the Vienna premier as Tatiana in Tchaikovsky’s Eugene Onegin (1934).

19. The vocal soloist chosen by Toscanini in his first US radio broadcast (1934). 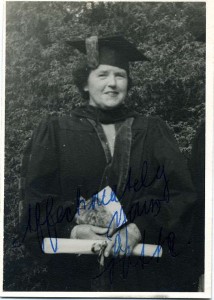 Honors: Several honors are mentioned above in the “Firsts.”

Undated honors include the building named the Lotte Lehmann Akademie in her birthplace (Perleberg); a street named for her in Vienna; a hall in her name at the Music Academy of the West (Santa Barbara, California);  a regularly-scheduled week-long vocal institute in Perleberg, Germany called “Die Lotte-Lehmann-Woche”; a newsletter that ran for years; a foundation that lasted around 10 years; master-classes named for her at various summer festivals; and the regular flow of biographies, re-releases of her recordings and the appearances of her former students, now often in mentoring roles, but always with the mention of Lehmann. Marilyn Horne sang a series of recitals in the 1990’s called “Songs Lehmann Taught Me.” 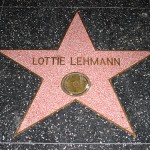 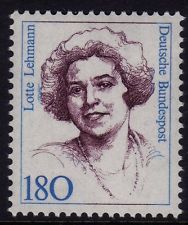