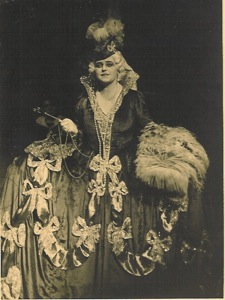 Lehmann as the Marschallin

Introduction to the Discography

The chronological discography that you can find by clicking Discography (above) is designed to satisfy the needs of both the serious collector as well as the casual listener. I also provide a page for information on early recordings. On another page I discuss Lehmann’s recordings in general.

The discography includes commercial recordings made on “shellacs” (nominally 78 rpm records) from 1914 until 1949. The discography’s index number is followed by the name of the opera (upper-case) or the name of the song (lower case). Then the aria, the composer and the recording date are listed. The recording date section may have several different dates; this is because different sources provided varying information, possible re-recording of that selection at a later date, or a transfer date. The next data are the matrix, followed by catalog numbers and the LP and a few of the CD releases. (The word “matrix” means the original master made from the hot wax disc on which the original sound was recorded.)

The numbers that follow “LP:” refer to the LP REFERENCE. At this time I don’t provide complete information on the contents of the many CD re-releases. A list of CDs may be found on the Recordings page.

A word about original speeds of the “78s” recorded before 1931. The well-known discographer William Moran has pointed out the fact that no written record was kept of the speeds used in early recordings. “A deviation in speed of 4 revolutions per minute (rpm) changes the pitch (and thus the key) by one-half tone. Not only is the pitch incorrect…but…the tone and quality of the voice is distorted,” writes Mr. Moran in “Nellie Melba: A Contemporary Review.” Only the approximate range of speeds (“78’s” vary from 72 – 87 rpm) can be offered. The careful listener should compare the recording against the published key. (See the article by Andrew Walter at the end of the piece “Early Recording“.) Even the speed of re-released LPs isn’t always correct. With a variable speed turntable, one can find the key of the selection and adjust with the help of a piano, pitch-pipe or organ to bring the recording to the correct pitch. CDs re-releases have sometimes corrected this problem. The trouble with the suggestion of trying to correct the pitch at home is that Lehmann often transposed selections (less frequently with arias with orchestral accompaniment). Further, exact pitch is a recent phenomenon; pianos, organs, even orchestras played (and even now, play) at a wide variety of pitches. Any exact “pitching” of some of these recordings is difficult.

This discography is based on that of Floris Juynboll which appeared in the March 1985 “Stimmen die um die Welt gingen” magazine. With the publication of  “Lotte Lehmann, A Centenary Biography” by Alan Jefferson, Mr. Juynboll considerably altered and expanded his original publication (especially the commercial recordings). He doesn’t include much material in the “non-commercial” section, but I have often referred to his data (J.:) in both the “commercial” and “non-commercial” section. He sometimes contradicts himself and this has been noted “???”. In some listings there are two dates, one from my sources and another from Juynboll’s. Until I am more certain of the facts, I will let both stand. There is also the German language publication of Mr. Jefferson’s biography which has an even more recent Lehmann discography. Published by Schweizer Verlagshaus, Zürich in 1991, errors, typos and other discrepancies occur in this work as well as any, but when additions or corrections seemed warranted, they have also been included in the present discography.

Unless otherwise stated, all entries are sung in German.

How to use the Discography

Let’s say that you’d like to know if Lehmann recorded Vissi d’arte from Puccini’s Tosca. Simply do a search for Vissi d’arte and you’ll see that there are several discography reference numbers (050, 149, 440 a, mc 515). You’ll find that Lehmann first recorded the aria in 1924 (050) for Odeon.  The “mc” reference means a master class that Lehmann taught.

After the index number, the first number given is the matrix number followed by the single-side, then the double-sided catalog numbers. These are all nominally “78” rpm or shellacs. (As I mentioned above the actual rpms may vary from 72 – 80). (Here’s more information on early recordings.). The LP number refers to the LP Reference Index. Just scroll to that portion of the LP Index where you can find the aria’s appearance on vinyl. CD references are not yet integrated into the complete discography. A list of CD re-releases can be found on the Recordings page.

Index number 149 will lead you to another Lehmann Vissi d’arte recorded in 1929. Various companies’ catalogue numbers are listed after the matrix and Odeon number.

Index number 440a lists a “non-commerical” recording of Vissi d’arte, taken from a radio broadcast in 1938. There is also an LP reference number.

Still following the string of Vissi d’arte references will lead you to Index number mc 515 which indicates a master class recording. Here Lehmann teaches “Vissi d’arte” at Northwestern University in 1967. When no other location is mentioned at the end of such an entry, the recording can be heard at the Lehmann Archives at the University of California Santa Barbara.

Featured Selections of the Discography

From an acoustic recording of 1917 you can hear Lehmann in Puccini’s La Bohème: Man nennt mich jetzt Mimi. Remember that at that point in history operas were sung in German for German-speaking audiences, no matter what language was the original one. We know this better as “Mi chiamano Mimi”. (014) Mann nennt mich jetzt Mimi

One of Lehmann’s best known roles was that of the Marschallin in Der Rosenkavalier by Richard Strauss. Her attention to the details and inflections of the words was famous and this excerpt from the studio recording with the Vienna Philharmonic from 1933 will provide an example. Da geht er hin, der aufgeblasene schlechte Kerl (218)

Though renowned for her Marschallin, Lehmann didn’t want us to forget her commitment to the role of Fidelio. Here is Komm, O Hoffnung from Beethoven’s Fidelio, recorded in 1927, the centennial of Beethoven’s death and the year Lehmann first performed the role. Recording with the microphone had only been around a few years, and it allows the listener to hear the words with much greater detail. I offer a whole page on this one song with a brief synopsis of the opera and text/translation. (103)

Another role that Lehmann greatly enjoyed singing was that of Elisabeth in Tannhäuser by Wagner. This is a 1930 recording of the first act aria Dich teure Halle in which Elisabeth joyfully greets the halls of song where Tannhäuser will once again sing. (169)

When asked to name the greatest recording of the century, many choose the Lehmann-Melchior-Walter version of the first act of Die Walküre by Wagner. This has been in print since its initial recording in 1935, but I thought it would be interesting to hear Lehmann live in 1936 in an excerpt from the second act as the deranged Sieglinde let her passion free. Fritz Reiner and the San Francisco Opera Orchestra. (433) [coming soon]

Tristan und Isolde is an opera that Lehmann didn’t sing. She studied the role of Isolde and did record the Liebestod Mild und Leise and it is one of the glories of her legacy. Jim Svejda of “The Opera Box” radio program declared it the most intensely beautiful Liebestod ever recorded. (177)

From the very beginning of her career, Lehmann sang Lieder. She said she developed her appreciation for its subtleties only later in her life. One can hear the words tumble out in the Brahms song O liebliche Wangen recorded with Paul Ulanowsky in 1941. (317b) [coming soon]

Lehmann was the first female to record Schubert’s complete Winterreise. The sample here is Mut or Courage, the twenty third of the cycle. Detail to the words marks Lehmann’s accomplishment. (299b)

After Hitler’s troops took Vienna Lehmann never sang in Europe again. But she brought with her a love for Wien expressed in a set of songs she recorded in 1941. This is Benatsky’s Ich muss wieder einmal in Grinzing sein where Lehmann is collecting her family for their outing in the park where they’ll celebrate the Sunday with a glass of wine. The pianist is Ulanowsky. (367)

Though Lehmann was certainly best known for her Lieder, she did sing French Mélodie. One hears the passion she brought to such an endeavor in the Duparc La Vie Antérieure recorded in 1949, among the last studio recordings she made. Again, the pianist is Ulanowsky. (416)

Lehmann became an American citizen and in the MGM movie of 1947 had the opportunity to sing Irving Berlin’s God Bless America. Though an oddity in Lehmann’s output, it allows the English listener a closer glimpse of the singer. (410)