There’s always confusion on the names of the opera houses in Berlin. These notes by Dr. Kater may help. 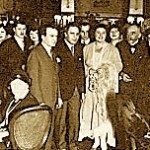 Bruno Walter conducted at the Charlottenburg Oper (Städtische Oper or City Opera). After the war it was called the Städtische Oper Berlin, until 1961 when it was re-named the Deutsche Oper. The Lindenoper is the Staatsoper, also called Staatsoper unter den Linden (previously known as the Royal Court Opera); this was where Erich Kleiber conducted. The Kroll Opera house, where Klemperer conducted, was destroyed during the war.

Hofoper and Court Opera are the same thing. After WWI Germany became a republic, then the former Hofoper was re-named Staatsoper. The main house Unter den Linden has a long tradition back to the 18th century.

The Deutsche Oper is situated in Berlin-Charlottenburg. It was founded at the beginning of the 20th century. I think it was from the beginning a theatre of the city of Berlin, but at least in the time relevant for Jadlowker.

There was the “Neues Königliches Opernhaus” which is known better as Kroll-Oper, opened for the first time around the middle of the 19th century. It was destroyed in 1914 and re-opened in 1924. The house was massively damaged in WW II and later torn down.

But “Hofoper” and “Staatsoper” aren’t just the houses but can also mean the “company,” like when you say that the “Met is on tour.” In this sense the Krolloper was part of the Hofoper and later Staatsoper (in the time relevant for Jadlowker).

Berlin State Opera (Staatsoper): the former court opera house (Hofoper) on Unter den Linden, where, after rebuilding, it still stands. On account of its position it was often referred to as the Linden Opera (Lindenoper), particularly in order to distinguish it from the State Opera’s second theatre (the Kroll). Today the Deutsche Staatsoper.

Kroll Opera (Krolloper): Until 1923 properly called the Theater an Königsplatz, thereafter Theater am Platz der Republik, where it occupied a site adjacent to the Reichstag. From 1919 to 1923 the Kroll was leased to the Volksbühne. In 1924 it reopened after reconstruction as a branch of the State Opera. In 1927 it was reconstituted as an artistically independent opera house (though administratively it remained an integral part of the State Opera) with Klemperer as director. It was destroyed in the war.

Berlin City Opera (Städtische Oper): Originally the Deutsches Opernhaus, it was also often referred to as the Charlottenburg Opera on account of its location in that suburb. Initially it was run as a private enterprise with no state subsidy, but the company running it went bankrupt in 1924. It was then acquired by the city council of Berlin, which reopened it as the Städtische Oper in 1925 whereafter it became a rival to the Linden Opera. In 1933 the theatre reverted to its original title. It was destroyed in the war, but the West Berlin Deutsche Oper today stands on its site in the Bismarckstrasse.

Die Grosse Volksoper: A purely private undertaking founded in 1919, it played from 1922 until its bankruptcy in 1924 in the Theater des Westens, an operetta theatre still standing close to the zoo.