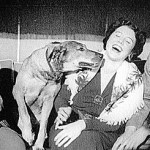 Rose Bampton offered these memories of Lotte Lehmann in an interview with Beaumont Glass in January 1986: When I was asked to sing Elisabeth in Tannhäuser for the first time, I remembered Lotte in that role and longed to study it with her; but I didn’t dare to ask her. Constance Hope said: “Why don’t you go and speak with Lotte? She could just talk to you about the part.” So I took along a flower and went to her hotel. She was so wonderful! Speaking with her about the role made everything so much clearer to me.

Pelly [Wilfred Pelletier, Miss Bampton’s husband] and I had heard her Fidelio in Salzburg with Maestro Toscanini, and had both wept. And now this chance to speak with her!

I often sang in Buenos Aires, at first Kundry, Italian parts, and Armide in French; then they asked me to do more German roles. I just knew I’d first have to go out to California and work with Lehmann for about a month before my next South American season. I had not yet performed those German parts and I needed her guidance, especially after I had felt the results after our talk about Tannhäuser.

I stayed in a little hotel in Santa Barbara and went out to Hope Ranch every day. I spent most of the day with Lotte, and sometimes most of the evening too.  She was a very great inspiration to me! Every night, when I went back to my room after a lesson, I would write down on that hotel stationery everything I could remember that she had said about the interpretation of the role we were working on. The next day I would come back to her full of enthusiasm—and then realize how much I had missed, how much I hadn’t written down, how much I had forgotten. That night: back to the writing desk! Soon I had reams of notes. I carried them with me for years, wherever I went to sing those roles. I kept going back to those papers, and each time it was like being with her again at Hope Ranch and having her talk to me.

When she acted out certain parts of the role for me, she was just like a young girl! It was such a revelation, what she made me feel about that part!

Rehearsing Eva in Buenos Aires, the director started to laugh at me. “Rose,” he said, “this is Evchen, not Sieglinde! You’re crossing the stage in three strides! Evchen is not a mythological heroine, she’s a young girl!” I realized I had forgotten my lesson. I went back to my notes and they put me right back into Lotte’s studio again.

While I was in Buenos Aires I was asked to sing the Marschallin. Jarmila Novotna, a great Octavian, was there too. But I said: “No, I can’t do it this year.”

“Why not?” they wanted to know. “We’d give you all the coaching, and you would have a wonderful director.”

“Because I haven’t worked with Lotte Lehmann yet. Until I’ve worked with her on that role of all roles, I won’t feel I know it.”

So I didn’t do Rosenkavalier that year. In a sense that made me sad, for I would have loved to do it with Novotna. But I had seen Lehmann in the part; and that had been such an unforgettable experience that I knew I would have to study it with her.

When I was acting out the end of the first act for Lotte, I did what I had always seen her do in that touching postlude, when she lets the mirror slip out of her hand. That was a famous moment in her interpretation. But she stopped me.  “No,” she said, “you may not copy me! It’s very nice; but you must never copy anything I do. It must come from within you. You must find a way to do it that is from you.”

Nevertheless, that gesture seemed so natural and so right, that I confess to using it after all, when I performed the Marschallin. I couldn’t help feeling it had to be like that.

Sieglinde was another problem. I was very straight-laced; I was brought up that way. One day she was absolutely furious with me. “Oh, you’re too much the lady! That has nothing to do with what you’re singing! Do you love Pelly? I don’t think you know the least thing about love!”

“Well, I certainly do love Pelly, and whatever I know about love is my private business.”

“Oh, that’s where you make a great mistake!” she told me. “Everything that you know about life—all your experience of life—has to come out in the part you’re doing; and if you are in love with Siegmund, you have to show that love! Why don’t you just pretend it’s Pelly?”

For some people, that approach might be too personal; but she had to work that way with me, because I had too much restraint.

I also studied lieder with her, when I was preparing a Town Hall recital. What an insight she had into the poetry! I had previously studied with Elena Gerhardt, another great lieder singer, who was of course completely different, much more restrained in expressing her emotions. When I came to Lehmann it was just a whole new world! With Gerhardt the musical line was everything; with Lotte there was first the poem.

Her approach has naturally influenced me in my own teaching. You know how so many of the youngsters just stand there doing nothing until it’s time to open their mouths. I have to remind them that the song begins with the first notes of the accompaniment and ends with the last notes of the postlude.

Lotte was also marvelous as a friend, so open and giving! She had a very great influence on my life…. She did a little portrait of me on a ceramic tile. It is very precious to me.