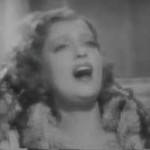 Beaumont Glass writes: Lotte and Jeanette MacDonald began working together in the summer of 1944, to prepare the role of Marguerite in Faust for some performances with the Chicago Opera. After their first two-hour session, Miss MacDonald telephoned Constance and told her that the lesson with Lehmann had been a revelation, “as if I had been in a dark room and suddenly a window was opened and sunshine flooded all around me.”

After their work together, Lotte wrote:… “There is nothing that could give me more satisfaction than to think that I really help you to develop what is hidden in your soul: I cannot make you a great artist if you are not one with all your being. And you are: it is almost miraculous how quickly you are able to bring to life what has up till now only slumbered in your heart. You have always much too much been concerned about the technique of singing. And also the fear to ‘overdo’ has held you back. Seeing what you are able to do after such a short time, I don’t doubt that the possibilities are almost unlimited for you, especially as a concert singer.”

And before Miss MacDonald’s first performance in Faust:

“…My heart is with you on your Tour—and especially in Chicago with your performance of Marguerite. I will be at least as nervous as you. Please, please, don’t forget to be very, very simple in the beginning! The first entrance is so difficult—and so damned important…. Don’t make gestures—you easily do here—and it looks very artificial. And don’t forget to turn your face quicker to the audience. They want to see you. I can’t blame them, by the way.”

Miss MacDonald shared with Lotte her impressions of the rehearsals and first performance of Faust in Chicago: 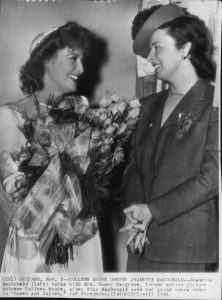 (including breaking in a chap who had never sung the role before [Marine Captain Michael Bartlett]). I’ll just tell you a bit about Faust—Sang R&J Saturday the 11th and Sunday noon had a piano rehearsal with Maestro [Fausto] Cleva. He raced me through it like a bolt of lightning and stopped me on every little sixteenth note or breath; it was very disconcerting and I felt very much like a pupil whose teacher has just about come to the end of his rope in patience. I wasn’t sure whether to cry or get mad and make a rude remark but decided that was what the old boy wanted me to do so I did neither. I simply ‘yessed’ him with a smile and secretly called him a dirty name! The tempos were so shockingly fast I was worried that I would ever be able to act the role and when I mentioned a couple of places that I took a bit slower he said I would have to follow him and that this is the way he does it. When I left I was burning with indignation and not a little worried about the outcome but he did pay me the compliment of admitting I knew the score thoroughly… Thank God! Monday at 11 a substitute tenor went over the business of the garden scene with Bergman. Much was changed but I recalled your message and it is true that the actual business doesn’t in the least affect the characterization. I found B very charming and he even liked the idea of having the nun succor me in the church scene. Next morning at 10:30 orchestra rehearsal with Pinza and the same substitute tenor (Raoul Jobin, who was scheduled to be there, had a recital the night before and Cleva forgot to get him out on the train after the concert, hence he was unable to be at the orchestra rehearsal). At this rehearsal it was discovered that all the entrances and exits given me the day before were wrong; and since Mr. Bergman had had an argument with one of the directors the night before, he had taken the train for New York. With the orchestra the tempos slowed down somewhat and I only missed a couple of places by a breath! After the rehearsal I went home and expected a call all afternoon from Jobin who didn’t get in till later in the evening, at which time I had gone to bed. He came to my hotel at 1 p.m. next day when we ran throught the business and sort of hummed the parts. I must confess I was very apprehensive of the performance, but he assured me he would guide me if I started to do anything too wrong. I didn’t! I was on stage a bit too soon on my first entrance—which necessitated my filling in some time, so I forgot to be too nervous. I may add that the stage manager sent me on! Garden scene went extremely well—Jewel Song got wonderful reception and I was not too displeased (though I am always one to be utterly miserable if every little thing doesn’t go exactly as I want it to). The church scene was so changed that I had to cut the pillar bit and made a flagrant error in my lyrics Dieu, quelle est cette voix qui me parle dans l’ombre? I really don’t know what words I sang, but no one was any the wiser but the prompter, who almost had a baby; but when I came in with the right phrase next he was quite relieved. This act got quite an ovation. The nun was eliminated because they forgot to have anyone make arrangements to get a nun’s outfit from Il trovatore, so some females came to me—all grabbing at different parts of my anatomy! The scene with Valentin was perfect as I never did have a rehearsal with him and so did as I damn pleased. Oh! I forgot to mention: some friends told me the church scene made them cry. The prison scene was splendid except that I couldn’t shake the tenor. I literally pushed him away from me a couple of times but he always came pawing back at me and finally for the trio I got down on my knees for I knew he couldn’t follow me there. It worked and also proved effective. The audience missed nearly all of the pourquoi ce regard menaçant, etc., because the ovation was so great. I think you would have been pleased, Lotte, and wish you could have been there to point out the good and bad spots. It was however really like a good dress rehearsal for me and now I really want to DO IT…. By the way, I gave the critic Claudia Cassidy an interview in which we discussed you…. Everyone is scared stiff of her and for me to have won her approbation seems to have been nothing short of a miracle…. Give my best to Miss Holden and my love and gratitude to you, for without the careful coaching I should never have been able to cope with everything, and above all you have given me a confidence I have never had before and I will forever be grateful for that.”

After Lehmann’s painstaking attention to every detail of characterization, to every nuance of feeling, it came as quite a shock to come into contact with the “real” world of instant opera. The following excerpts from a letter written to Lotte on July 19, 1945, give Miss MacDonald’s impressions of a production of Faust in Cincinnati:

“We had a couple of mishaps—a result of inadequate preparation. The way these things are thown together is appalling. There was at no time any attempt to rehearse the stage business—not a sign of a prop. When I asked the (so-called) stage director what the sets would look like, and where the benches, door, etc., would be, it was as though I had committed a faux pas. The truth of the matter was that he didn’t know himself, and it wasn’t until the actual performance (before each act) that I was able to find out, and could look the situation over. I might add that I even took the liberty of placing the furniture for my own convenience! Actors and actresses had no idea which side of the stage they were going to be on until the time arrived. The Church Scene was an unholy mess, with the chorus picking up the wrong cue for the prayer, which meant that the orchestra and I were doing one thing and they were singing another. It was pretty ghastly….The prompter had left his box to play the organ backstage, and the stage manager was in his place. He, in turn, knew no more about prompting than your little Mausi [one of Lotte’s Pomeranians]. So, all in all, the effect must have been like a cat-and-dog fight. Ultimately, however, the chorus, realizing I had stopped singing, took their cue and stopped also. I then proceeded with the orchestra alone. At any rate, I won!”

Quite a contrast to Toscanini’s sixty rehearsals of Die Meistersinger at Salzburg in 1936!

After their work on operatic roles, Jeanette MacDonald returned to study lieder with Lotte, who was surprised at her aptitude for an art-form so far removed from her usual repertoire.

One evening Lotte invited Jeanette and her husband, Gene Raymond, for dinner. The maid of the moment was excited all day at the thought of seeing such celebrities up close. Lotte told Jeanette the girl was a fan of hers and would be deliriously happy to serve her. When the maid came in, the lovely screen star flashed her famous smile. Perversely, the maid made a point of ignoring her. The MacDonald smile was beginning to freeze, but still the maid never cast a glance in her direction and went stiffly about her business. When she had clumped out for the last time, Lotte and her guests had a hearty laugh.

For more information on MacDonald you can read  the authorized biography “Hollywood Diva” by Edward Baron Turk which covers Jeanette’s life and work thoroughly.