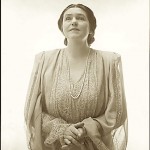 Below, you’ll find Hilary Finch’s response to Lehmann’s recording of Winterreise from the book, Song on Record, I Lieder. And read what Lehmann herself has to say about a woman singing “men’s” songs.

Ira Hirschmann was the founder of the “New Friends of Music” series held at New York’s Town Hall. Here is what he writes about Lehmann’s Winterreise.

Among the ground rules I had laid down for the New Friends of Music concerts was that all artists were to appear in the same way, with no special fanfare or treatment. But there were a few occasions when I was obliged to cope with objections to this rule by famous artists and their managers. My severest test came with Mme. Lotte Lehmann, an artist who brought everything she sang to life and was my favorite lieder singer. She was one of the few artists in the world capable of understanding and vocally realizing the great lieder cycles of Schubert, Schumann and Brahms.

In 1937, after her concert for the New Friends of Music, I went backstage to the artists’ room and asked her if she would sing Franz Schubert’s Winterreise for us the following season. This supreme classic, based on an epic poem by Müller, requires an entire concert and is the severest test of the artistry of any vocalist. She looked aghast and replied, “It would take me three years to learn it.” “Very well,” I retorted, taking out a small notebook, “You are engaged to sing it on Sunday, April 13, 1940.”

True to plan, three  years later the work was announced for a concert in the 1940-1941 New Friends series. On the appointed date I arrived at Town Hall fifteen minutes before the concert was to begin to check on arrangements. The Hall was filled to the last seat, including standing room. I found a mild insurrection going on backstage. Mme. Lehmann’s personal manager was insisting that seats be made available on the stage for the overflow, that a red carpet be put down running from Mme. Lehmann’s dressing room to the center of the stage, and that flowers were to be handed to her both before the intermission and at the conclusion of the concert. All three requests were in direct violation of my rules, and I refused to make any exception. Music was music, and all outside trappings, especially ones that lifted one artist above the others, were taboo. I turned to Mme. Lehmann and pleaded with her, but she adamantly refused to go on stage unless her conditions were met. I started the concerts on the split second of 5:34 p.m., and it was already 5:25. I could hear the buzz of anticipation from the full house beyond the curtain.

“If you do not go on stage in exactly nine minutes,” I said, looking at my watch, “I will go out and announce that the concert is off, and why. Would you like to come out with me to make sure I say it correctly?” She glared at me, her eyes on fire, and said, ‘”Very well, I will agree about the red carpet and the flowers, but I insist on your permitting people to sit on the stage.”

“Why?” I implored. “Because otherwise I will be lonely,” she replied. But I held my ground and she finally assented.

An adoring audience, unaware of the minor drama that had been played out backstage and the near miss of the concert, greeted her appearance of stage tumultuously. The great artist warmed to the demands of the noble score as she sang, and when she reached the climax she soared to a transcendence. After the last notes the audience thundered its applause, and I ran backstage to offer my congratulations before her admirers arrived to besiege her. “You sang like an angel,” I proclaimed over the roar of the applause still echoing from the hall. “Yes, but I was lonely,” she answered, still unwilling to lose the argument even under the spell of her triumph. “You were not alone, Madame Lehmann, Schubert was with you,” was my quick rejoinder.

Some months later, after a concert of the Philharmonic orchestra, I met her at a party given for Maestro Toscanini, who adored her. The Winterreise episode forgotten, we had a warm discussion, and she invited me to her hotel suite for tea, where I found her immersed in painting handsome designs of china plates. It was apparent that she was also a gifted painter. We became friends.

Later that month I was invited to a showing and sale of her ceramics, where I discovered a plate on which she had painted a likeness of Toscanini. I bought the plate and on impulse mailed it to the Maestro with a note asking if he might inscribe it with his signature. What more delightful souvenir of my friendship with two favorite artists could be found? But time passed, and as I did not hear from him, I forgot about it.

About six month later a large box arrived at my apartment along with a letter from the Maestro’s son, Walter, which was anything but pleasant. It said, in effect, that we was happy to be rid of the plate as it had been the object of some friction in the Toscanini household. I had not realized that it was impossible to inscribe on the inner circle on the back of a china plate without first removing the glaze. At the Maestro’s insistence, and with some difficulty, Walter had finally found the means of having the glaze removed from the plate on which the Maestro was then able to write an inscription.

He had painted a musical staff of four bars from the Chorale of Ludwig van Beethoven’s Ninth Symphony. It read: To Ira, Seid umschlungen Millionen (Be embrace, you millions) s/Arturo Toscanini 3 – 25 – 51…[later in this piece LL responds to a letter from Hirschmann with “it is sad to grow old,” and Hirschmann continues] I like to think that she derived some solace from the knowledge that her memory would continue to remain youthful and alive through the joy she had given to her myriad friends from the vibrancy of her personality and through the recordings of her timeless and incomparable artistry.

Hilary Finch writes of Lehmann’s recording: Lotte Lehmann’s version, despite being pieced together from discs made at various times…and despite being smattered with period ritenuti and portamenti, is in a bold, entirely convincing grand romantic style. Here is the heroic, even Byronic protagonist starting out with fierce determination, identifying with remarkable intensity even without recourse to mezza voce with the brook’s icy surface and undercurrent in 7, and recalling Goethe’s Prometheus himself in the triumph of 22’s final cry of ‘sind wir selber Götter!’. Lehmann captures, as few singers after her do, a rare volatility of mood within a sweeping overall momentum, and recreates a sense of Einsamkeit totally bereft of self-pity. Her instinctive integration of each word and phrase into the particular moment of geist of any one song is exemplified in 4; her balancing of the timescale of past and present in the last two lines of 11 and throughout the gasping, tugging lilt of 13 is quite remarkable…

In More than Singing Lehmann wrote in the Introduction: I should like to touch here upon a question which often arises, as to whether a woman should sing Lieder, which according to the poem are written for a man. I say with emphasis: Yes!

Why should a singer be denied a vast number of wonderful songs, if she has the power to create an illusion which will make her audience believe in it? It would be a very sad indication of incapacity if one could not awaken in the listener sufficient imagination to carry him with one into the realms of creative phantasy. If you sing of love and happiness, you must be a young person convincingly–and perhaps in reality you are neither young nor beautiful…The stage decrees limitations which simply don’t exist on the concert platform: on the stage you see the person who is represented, your representation must in some measure correspond outwardly to the character which you portray. The imagination of the audience has its limits: it sees the figure before it clad in the frame of the role, surrounded by the characters of the story which is being unfolded. In a certain sense it is very much more difficult to retain the illusion of the portrayal when the limits are set by reality. On the other hand on the concert stage it is the unlimited power of your art which must change you into just that figure which you seek to bring to life. You are without any material aids, without any gestures, without the ramp which separates so wonderfully the world of the stage from the world of reality. You stand close to the audience –almost one with it, you take it, so to speak, by the hand and say: “Let us live this song together!  Forget  with me that I cannot have a thousand real forms, for I will make you believe in all these forms as I change my personality in every song. Let us together put aside reality, and let us, singing and hearing, soar away into the limitless realms of phantasy…” As Mignon says in Goethe’s Wilhelm Meister–“und jene himmlischen Gestalten, sie fragen nicht nach Mann und Weib…”(And there each celestial presence shall question naught of man and maid…)–so the singer soars above all limitations, is young, is beautiful, is man or woman, longing and fulfillment, death and resurrection…