Hungarian born Ernö Balogh (1897 – 1989) studied piano in Budapest under Béla Bartók and in Berlin under Leonid Kreutzer before coming to America in 1924 at the advice of violinist Fritz Kreisler with whom he had worked as an accompanist on a tour of Scandinavia. Mr. Balogh settled in New York and established himself as a concert pianist and accompanist for great singers including Lotte Lehmann. In later life he taught piano and composition at the Peabody Conservatory in Baltimore. The Ernö Balogh Collection at the Library of Congress Music Division contains a small collection of correspondence from Lotte Lehmann as well as several photos, letters and a few published scores of contemporary composers, almost all autographed by the principals.

In the Summer of 1989 we reported the death of Ernö Balogh, one of Lehmann’s major accompanists. He appeared on Lehmann’s RCA early lieder recordings. In Opera News, 31 Dec. 1956, Balogh spoke about his career and his work with Mme. Lehmann. “My happiest artistic association was with Lotte Lehmann, fortunately the longest in years though my last as an accompanist. With her, not merely every concert but every rehearsal had the intensity and importance of a music festival. Whether she sang alone in a room or before several thousands, it was the same for her. If her whole career had depended on every song she could not have poured more into it… Lehmann radiated a constant glow of warmth. She could mold an audience after a few songs into a happily united group which seemed to enjoy a holiday reunion. I heard her from both sides of the concert stage and in the opera houses of two continents; she created a happy atmosphere everywhere and always. She was the happiest when she could give, and she gave endlessly.” 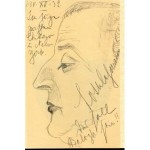 Of Strauss’ Ständchen he wrote “[It] has a flowing melody which requires a vocal outpouring that is used sometimes with discretion, sometimes with its full glamor. Lehmann’s infallible feeling for words and music always directed her to the right mood. Her comparatively slower tempo gave her opulent voice just the right majestic flow and her rendition brought this beloved Strauss song to a triumphant end.”

In English: Dear Mr. Balogh, This book doesn’t even please me anymore. Look upon it with forgiving eyes and don’t judge [harshly] these youthful books of your Lotte Lehmann who greets you affectionately.

[Determined to write a profile of herself to correct the one that appeared in the New Yorker] In the train, on the way to Omaha, Lotte—in reaction—borrowed a pencil from a reporter and started to dash off a profile of herself. “I’ll write it in German,” she decided. “Balogh can translate it.” Balogh, her Hungarian accompanist, bowed agreement. For a desk Mme. Lehmann used the score of Tosca, which she had been studying as her train crossed Iowa…. The writing of the self-analysis didn’t take long, but the translation was a Herculean task. M. Balogh beat his brow, tore his hair, and fairly writhed in the throes of composition. Miss Lehmann acted it all out as she went along, arms waving, brow knitting, while the volatile Balogh shouted back and occasionally told her to keep still so he could work.  She would subside then, but not for long….

The Lehmann piece wasn’t completely translated when the train reached Omaha, so Mme. Lehmann and M. Balogh finished it while sitting on a bench at the Union Station. Their shouts and gestures startled the other travelers.

Here is what together they fashioned:

You wanted to hear from me, myself, what I am like, which puts me in a rather embarrassing situation. I feel myself sitting before a mirror and looking at myself with strict objectivity, and I am afraid I will see myself in a more favorable light than I deserve.

What I see at the first glance: a fantastic enthusiasm for my profession, which I consider as a mission. To devote myself to it is my only urge, desire, and even more—an imperative command which I happily obey.

The next thing I love in life is freedom. I could not sing in a country where they would prescribe what I sing, how to sing, with whom, and in whose composition.

I like to travel, to sing to new audiences, which don’t know me yet, and I find a compensating satisfaction if my singing creates a bridge between me and my public, if art brings us together in a happy mood.

I love the German lieder of the romantic period, as I love everything romantic and mystic in life.

I love parts and figures on the stage which have strong personalities and whose fates are of a gripping nature.

If I am nervous I am likely to be unpleasant (mostly before opening nights, or sometimes before concerts). Then I can also be unreasonable, which I regret almost immediately.

Around the household I am useless—no talent at all for it. People think I am not vain, but I am vain enough to feel hurt if I am too much criticized….

But I had better stop now. It is horrifying to see oneself through X-rays. It’s better not to know too much, especially for my public, which should like me for myself.

Here is what B. Glass writes about Lehmann’s decision to change from Balogh to Ulanowsky:

Ernö Balogh could not come to Australia. He was about to get married. Lotte engaged Paul Ulanowsky as her accompanist for the Australian tour and the concerts on the way. At first she missed the warmth—the “Herzenswärme“—of Balogh….